Sometimes a Cigar Is (Not) Just a Cigar: Distinctions of Masculinity in SMOKE 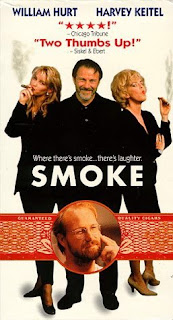 The movie Smoke, written by Paul Auster and directed by Wayne Wang, begins with a few men in a cigar shop talking about sports. Nothing unusual here, however, this charged, masculine space changes when Paul Benjamin walks in. He casually enters into the conversation when a question is posed regarding how tobacco was introduced to Europe. Paul goes on to tell a peculiar story of how Sir Walter Raleigh determined a way to measure the weight of smoke.

After Paul leaves, Auggie explains how Paul is a writer, but hasn't written since his wife was killed in the cross fire of a police shootout. He goes on to say that she was pregnant which means Paul lost his first child and his wife the same day. Here, in a matter of minutes, we move from a group of guys talking about the New York Mets, to an amusing anecdote, and finally to a tragic and intensely personal story. Wayne Wang's film, Smoke, is primarally about masculine identity and masculine friendship in particular, so it's interesting to see how Wang constructs a masculine space where emotional distance and intimacy can occur simultaneously.

I think it's important to note that Paul isn't present when Auggie, played Harvey Keitel, explains what happened. Also, Auggie has a certain matter of fact style in his delivery. However, he's not entirely removed emotionally. Auggie reveals he's thought a lot about that day: "Sometimes I wonder if she wouldn't have given me exact change, then ..." Within the scene there is a duality presented as Auggie is strong in the presence of others, yet openly admits that within his thoughts, he's concerned and affectionate towards his friend. This can even be seen as one of the marginal characters, after hearing Paul's story, is moved, yet also maintains a certain composure by saying "Bad Day at Blackrock, huh Auggie." This is a great line in that it communicates pathos for Paul, yet in referencing a popular film, also maintains a certain emotional distance.

Certainly one of the most overtly emotional scenes in the film is when Auggie shares his photo albums with Paul. This scene is removed from the cigar shop and is the only time we are inside Auggie's home. It is here where Auggie shows Paul the project he's been working on for several years. Every day at 8am, Auggie takes a picture from the street corner across from his cigar shop. As Paul flips through the albums, Auggie tells him that he's looking at the albums too quickly and that he should slow down. Each picture, while it may look like the others, is actually quite different.

It's a nice scene as Paul accepts Auggie's advise and does slow down. As he does so, Paul sees a picture of his deceased wife and begins to weep. The emotion here is tender and quiet as Augie says nothing, but simply puts his hand on Paul's shoulder. It is the first and only time we see any overt emotion from Paul, and one wonders if it is the first time he really mourns the death of his wife. It is shortly after this quiet moment when Paul begins writing again. Auggie is not only Paul's teacher here, he's also his healer. The scene, while being one of the most emotional in the film, still maintains a quietness and subtlety, as neither says a single word while Paul grieves.

Auster and Wang also balance vulnerability and strength when Cyrus tells Rasheed how he lost his hand. To begin with, Cyrus has a metal hook that makes his seem dangerous and machine-like, yet the guilt and torment he describes in this scene reveals a deep sadness below the surface. There is emotion within this scene, as with the others, but it maintains a strength and literal edge to it. The same duality is seen at the end of the movie when another highly emotional scene occurs. Rasheed, through the goading of Paul and Auggie, reveals that he is in fact Cyrus' son. There is a floodgate of emotion and sadness and joy that is tempered, or heightened in some ways, by an actual fist fight. Something is released here that goes beyond emotion, yet maintains it within a distinct masculine space. There is complex union here of love, honesty, and relief on one level, yet physical confrontation on the other.

In an interview about the film, Auster said the Christmas Story at the end of the film was in many ways, the heart of the screenplay. It is fitting because this story embodies a rich duality more completely than any moment in the film. To begin with, a crime begins the story when a young man attempts to steal some pornographic magazine from Auggie's store. Typical of the film, this scene of thievery is juxtaposed with something tender and kind. When Augie looks in the wallet that the shoplifter dropped and sees a picture of a young man with his grandmother, the hoodlum stops being a mere thief, and becomes a human being. Auggie decides to return the wallet, and ends up doing a kind deed by having dinner with the shoplifter's blind grandmother. They have dinner, drink wine, and talk for a long while. The story does not stay in this intimate and vulnerable space though. Auggie eventually goes to the bathroom only to notice several cameras stacked up along the wall. He steals one while the grandmother is asleep on the couch, and eventually leaves. The story then moves back into a vulnerable space for Augie as he says he felt guilt and attempted to return the camera later, only to discover the grandmother was no longer there.

This works as a great metaphor for the film because it reveals the constant shifting between kind deeds of giving and generosity and darker deeds of deception and even violence. One deed becomes linked and even dependent upon the other. A petty theft leads to Auggie performing a kind deed for an elderly woman, which leads to him stealing a camera, which leads to him feeling guilty, which leads to him beginning his "life's work" which, when seen by Paul, leads to his healing allowing him to write again. Wang and Auster's Smoke is about more than just masculine friendship, but friendship does remain a core theme. The film's depiction of it is especially interesting, in that for the friendship to maintain itself, intimacy and distance must occur simultaneously as well as misdeeds and kindness being intertwined and even leading to this intimacy.