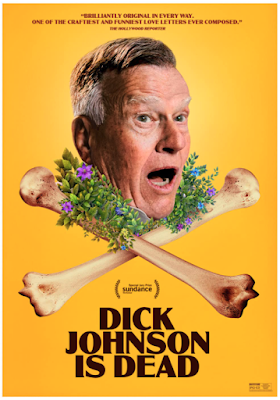 Kirsten Johnson's film- Dick Johnson is Dead is an ode to her father who is not only nearing the end of his life but also showing signs of Alzheimer's. In order to cope with her father's mortality and get ahead of things so to speak, she stages various scenarios through special effects and clever editing where her father dies or is outright killed. When I first started watching Johnson's film, I couldn't help but think of James Keach's 2014 documentary Glen Campbell: I'll Be Me which follows Campbell on his final tour and well into the throws of Alzheimer's. Keach's film was cringeworthy and, like the tour itself, seemed exploitive at times.

While Dick Johnson is Dead seems to start in this direction, it actually veers down a different path entirely.  About 15 minutes or so in, a crew member talks about the death of his own father which prompts a tender moment where Dick talks about the death of his wife. At this point, we realize the slapstick irony of the film's premise is secondary to what the film's actually about: the portrait of a kind and sensitive soul. A point illustrated even clearer when Dick talks about the childhood shame he had towards his own body and in particular, his deformed feet.  We see a closeup of his feet as he describes this shame. What's illuminating is the way he describes it which is similar to how an elderly person often describes such things- not with the shame once felt, but with a sort of curiosity or amusement, almost as if it happened to someone else. I say all of this to say, don't let the premise of Dick Johnson is Dead turn you away (or draw you in too much). The film is more about Mr. Johnson living than dying.

Email ThisBlogThis!Share to TwitterShare to FacebookShare to Pinterest
Labels: Glen Campbell: I'll Be Me, Kirsten Johnson