In Part 1, I quoted a passage from an essay by John T. Price suggesting work in and of itself is redemptive. I hear echoes of Price's essay in this passage from Jack Schaefer's western novel Shane when the father of the narrator is laboring with the title character, Shane, to uproot an enormous tree trunk:


What impressed you as Shane found what he was up against and settled to it was the easy way the power in him poured smoothly into each stroke. The man and the axe seemed to be partners in the work. The blade would sink into the parallel grooves almost as if it knew itself what to do and the chips from between would come out in firm and thin little blocks.

[My father] picked a root on the opposite side from Shane. He was not angry the way he usually was when he confronted one of those roots. There was a kind of serene and contented look on his face.   Shaefer, Jack. Shane. (pp. 25-26). Houghton Mifflin Harcourt. 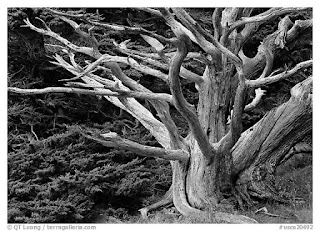 When the boy's mother, Marian, comes to see what they are doing, she is surprised because initially her husband intended to take the day off and rest.  Not sure what to make of the behemoth task her husband and Shane are attempting, Marian says:

The boy's father puts the axe on the ground, leans on the handle, and responds, 'Maybe it seems funny... [b]ut this is the best resting I've had for about as long as I can remember.'

Of the entire passage, I find these sentences to be the most interesting. Shaefer is working with a paradox here- not only illustrating the physical strain required to accomplish their task, but suggesting one can simultaneously feel "rested" within and during the task.


[Father] turned his head to face the stump once more and dropped it lower between his humped shoulders. Shane, opposite him, stiffened, and together they pushed in a fresh assault.  The stump quivered and swayed a little- and hung fixed at its crazy high angle....

I wanted to shout a warning. But I could not speak, for Shane had thrown his head in a quick sideways gesture to fling his hair from falling over his face and I had caught a glimpse of his eyes. They were aflame with a concentrated cold fire. Not another separate discernible movement did he make. It was all of him, the whole man, pulsing in the one incredible surge of power. You could fairly feel the fierce energy suddenly burning in him, pouring through him in the single co-ordinated drive. His side of the stump rocked forward and the whole mass tore loose from the last hold and toppled away to sprawl in ungainly defeat beyond them.

The silence should have been complete. It was not because someone was shouting, a high-pitched, wordless shout. I realized that the voice was mine and I closed my mouth. The silence was clean and wholesome, and this was one of the things you could never forget whatever time might do to you in the furrowing of the years, an old stump on its side with root ends making a strange pattern against the glow of the sun sinking behind the far mountains and two men looking over it... Shaefer, Jack.  Shane. (pp. 36-37).  Houghton Mifflin Harcourt.

It's a great passage and afterwards, the narrator's father again says he's rested and in fact says he's the most rested he has ever been.  The narrator's father doesn't feel this way because the work is over and he is now able to rest- no, this rest was felt during the work; because of the work.

This idea reminds me of the scene in Tennessee Williams' Cat on a Hot Tin Roof when Brick is explaining why he drinks every night and how he knows when to stop:

Brick: Yes sir, the click in my head that makes me feel peaceful.

Brick: It's like a switch, clickin' off in my head. Turns the hot light off and the cool one on...

This scene connects us back to both Shane and Kubrick’s 2001. Doesn't this click happen if one is putting himself or herself to the fullest possible use? Isn't this click the “rest” described in Shane?

In Part 3, we will look at this idea further and discuss the research of a psychology professor who has spent decades trying to understand this so called click and how one can learn to access it directly.
Posted by Darren Ingram at May 01, 2021